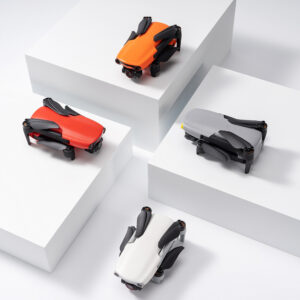 249g aircraft! at barely half a pound, the Autel Nano Plus weighs about as much as our phones and fits almost anywhere—from the side pocket of your hiking pack to the palm of your hand. Captured by the 10-bit camera allows the EVO Nano series to record up to 1 billion colors. Nano series retains rich detail in shadows and highlights, allowing greater flexibility in post-production. Autel EVO Nano plus can automatically balance overexposure and underexposure when shooting scenes with too much contrast, producing clearer images with more layers. Whether you’re flying over a gloomy hilltop at dawn or hovering at the base of a waterfall, EVO Nano series can cut through the haze with a fog penetration function that automatically adjusts the camera’s vibrance settings to make your footage look crisp and clear. With HDR on Nano and Nano plus will snap several photos at different exposures and automatically stitch them together- resulting in a photo with more contrast and dynamic range.That means more nuanced details in both the highlights and shadows for richer images with greater depth. EVO Nano Series can speed up time and movement with a single tap by creating a striking hyperlapse. With the touch of a button, Autel Nano series will rise into the air and snap a photo of you and your friends, automatically adjusting the lens so no one gets left out. Blur the background automatically for additional cinematic effect or dramatically reveal your epic destination — whether it’s the top of a mountain or your own backyard. Recruit your Nano plus to automatically follow any person, animal, or vehicle so you can focus on your activities while your Nano handles the cinematic side. This feature is no enabled currently but will be soon in an update.

Create dramatic, professional-level shots at the touch of a button with four automatic shooting modes. Add a soundtrack and filters in the Autel Sky app to make your video even more epic, allowing you to produce unforgettable results whether you’re a veteran pilot or completely new to the drone game.

Rocket, Fade away,Orbit, Flick and other actions just click the button, and the Nano series can automatically perform the corresponding actions. Let you become a movie master in seconds, show the beauty and show your attitude. Apply your favorite templates from the Autel Sky app for quick and easy movie-making, allowing you to drastically reduce the tedious editing process so you can share your creations in minutes. EVO Nano Series can fly farther while maintaining crisp, clear visuals with Autel SkyLink, our strongest image transmission system yet, which offers a transmission range of 6.2 miles, transmission quality of 2.7K/30FPS(The drone and the remote control are within one mile), and superior anti-interference capabilities, all while relaying stunning HD video. Done shooting? Simply place your smartphone close to the Nano to upload photos and videos at a speedy rate of 160Mbps using the Autel Sky app.

Record voices and ambient sounds on the ground through the remote control’s built-in microphone, allowing you to bring your videos to life even when your Nano is miles above. The EVO Nano series is the first and only aircraft series of its size to offer an advanced obstacle avoidance system — making it the obvious choice for users looking to avoid crashes and preserve the life of their aircraft. With three-way binocular vision sensors that enable the drone to perceive obstructions in front of it, behind it, and below it, the Nano can easily brake to avoid collisions. The EVO Nano series can fly continuously for 28 minutes, which means plenty of time to experiment with creative angles and dream up inventive shots. There are no reviews yet.

Be the first to review “Autel Nano Plus” Cancel reply